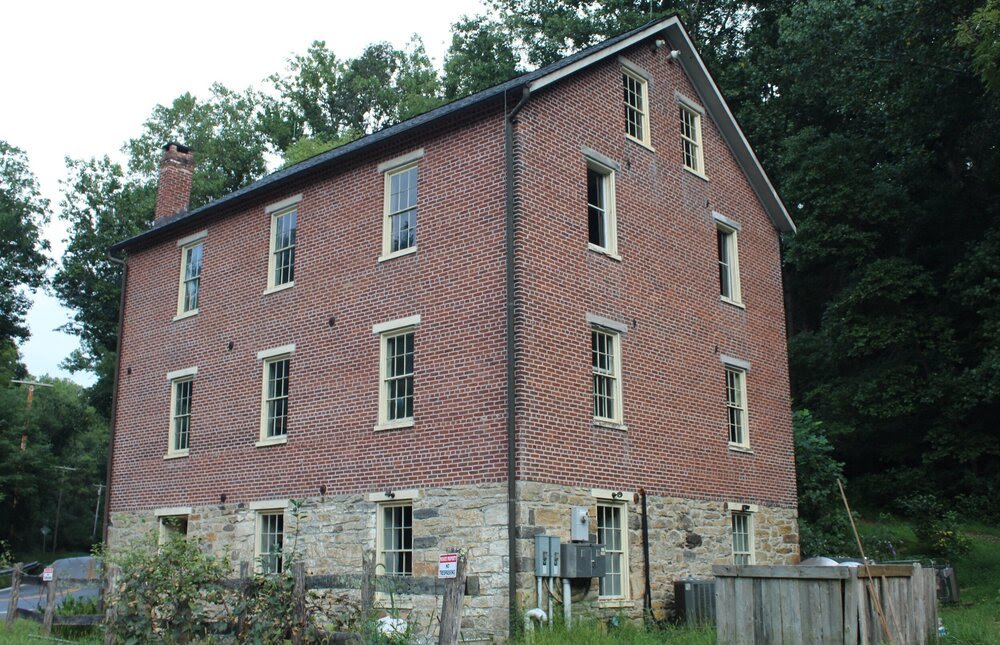 Once upon a time across America, the land was dotted with grist mills. These water-powered mills were situated next to a river where its current was harnessed to turn a huge water wheel, which helped drive gears to turn heavy millstones and ground the corn into cornmeal or the wheat into flour for baking and cooking.

What exactly is a grist mill? In simple terms, it is a mill where grains are ground. The word “grist” meant cereal grains to early settlers. The earliest grist mills in America were built in the early 1600s. But the grinding of grain goes back centuries before that. Think of a mortar and pestle and how it can grind something as simple as a dill seed or a whole black peppercorn. This is how grains were first ground. As time went on, large stones replaced the mortar and pestle in order to grind larger quantities of grain.

The current Manor Mill was likely built around 1815 on top of the original structure, which dates back to 1743. The basement of the current mill, which is made up of stone, may be the original stone foundation from the 1743 mill erected by Jacob Bull. The Miller’s House is still standing and was built at the same time as the Mill. The 1850 census of manufacturers listed John Merryman’s water mill as having two millstones running on a 24-foot overshot water wheel, one employee and an annual output of 352 barrels of flour, grinding both buckwheat and cornmeal.

The timeline for the Manor Mill is challenging to piece together in its entirety, but the following is what we have found in previous records. If you have any additional information or are able to fill in any gaps, please let us know! 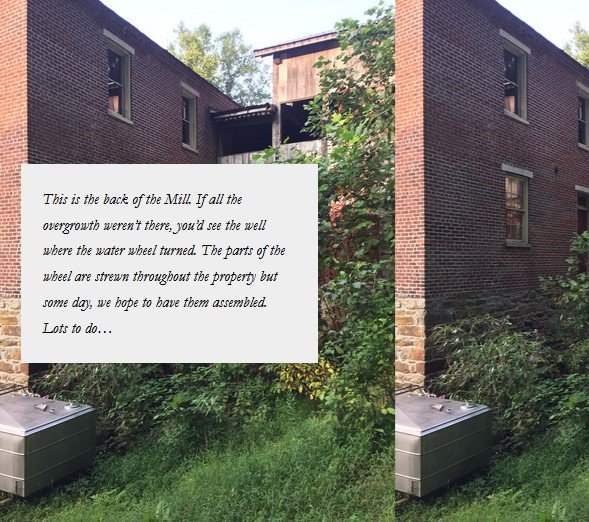 WHAT’S NEXT FOR THE MILL?

Good question! I don’t know exactly. People have shared a number of great ideas, but it’s a complicated property and there are lots of constraints. I hope to find the sweet spot of something that brings value to the community, highlights the Mill’s historic beauty and structure, and is self-sustaining financially.

Many of you knew the Mill’s previous life as Millstone Cellars which closed in 2018. I was sad to see it go and then watch the Mill sit vacant for nearly two years, filled top to bottom with stuff, the variety of which would take a full newsletter to annotate. Random or not, it’s all very cool in its own way and I’m doing everything I can to make good use of it all. In the meantime, for nearly a year, I have been working with Baltimore County to determine what’s possible with the property. 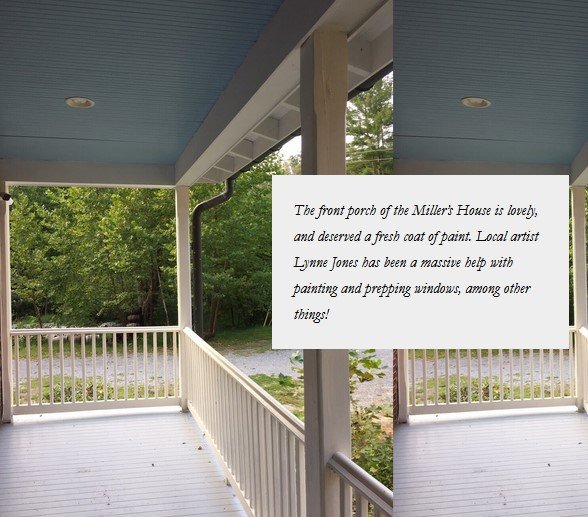 SURELY, YOU CAN BE MORE SPECIFIC!

Well, I’ll try! Naturally, I see a symbiotic relationship between the Miller’s House and the Mill, as well as the nearby Monkton Hotel, but it’s still very fuzzy. For example, an artist-in-residence program would make a lot of sense for both the house and as a gallery space within the Mill. Alternatively, my personal passion for education would see a really cool “maker space” school that features workshops and classes that combine early hand tools with modern technology. Because of its beauty, it’s easy to imagine the space being used for organizational retreats or small gatherings that are appropriate given the limits. None of this is viable in the context of a pandemic, but the property is far from ready anyway, so we’ll see where the twain shall meet. 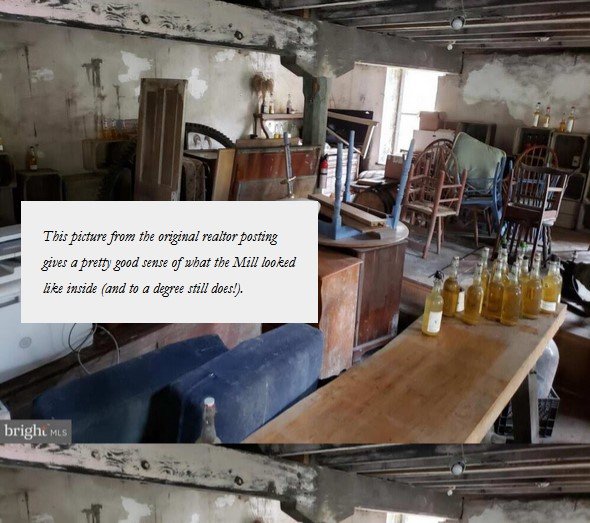 A LITTLE BIT ABOUT ME

Friends, acquaintances, bikers, and passersby have had mixed reactions to this undertaking. While most have exclaimed, “wow, how cool!” some add a shake of the head in disbelief at the prospect of trying to bring the property back to life. They’ve often looked at me with sympathy, as if I were about to swim across the Atlantic. No one seems to leave the property, though, feeling anything but a sense of awe at the structure and sheer strength of the building – the wide, stone foundation, the brick arches, the enormous beams. It’s daunting but pretty exciting.

While I grew up in Baltimore County, I have spent most of my adult life in Baltimore City with my wife, where we raised our two children for 10 years, until moving to Monkton in 2014. I went to St. Paul’s School in Brooklandville and later to Princeton where I earned a degree in English Literature and a Certificate in Teacher Preparation. Shortly after graduation, I was commissioned to write the 150-year history of St. Paul’s School, which was founded in 1849, and in many ways pulled me into the joys and appeal of uncovering and learning about history, scouring original sources, deducing and inferring. I’ve since been involved in a variety of entrepreneurial efforts in the technology and education and currently work as the Chief Innovation Officer for my current company, Finalsite. I’ve also been enjoying serving on a few local boards, the such as the Sparks Glencoe Community Planning Council, the Children’s Scholarship Fund of Baltimore, and more recently the Preservation Alliance of Baltimore County. In between it all I’ve found working on a building like the Mill extremely rewarding. 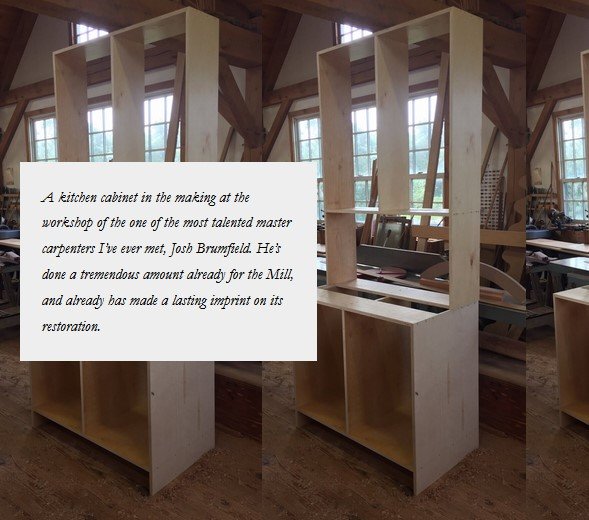 WHAT’S ALL THE WORK THAT’S BEEN HAPPENING?

Clean up! Barn, house and Mill were nearly full of stuff. While it was tempting to just throw it all out, I’ve been going through everything carefully as artifacts from the Mill’s former life were scattered around, in addition to a variety of unexpected finds, including some cool antique tools and old-fashioned farm equipment. All of this will eventually, and somehow, be incorporated into the property, with a preference toward using things versus trying to sell them.

Over the last four months, I’ve been largely focused on the Miller’s House. It’s a little easier to get my head around it as it’s a modest two-bedroom farm house that was already in decent shape. Needless to say, it still has required a big and broad fresh coat of paint, a sanding of the floors and a lot of repairs. 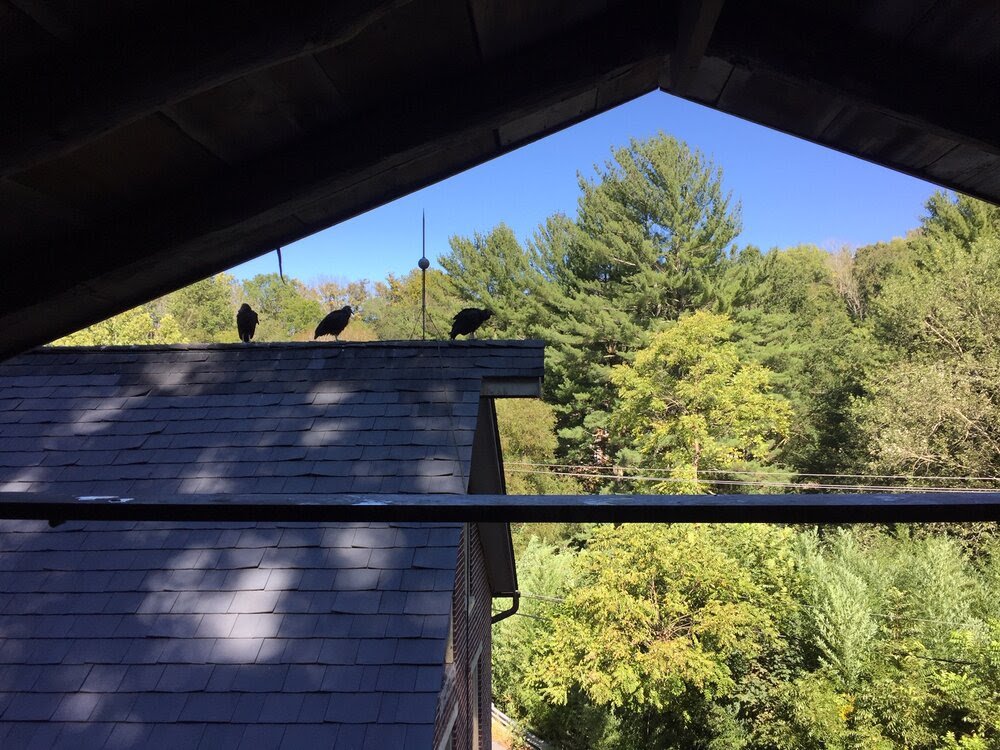 WHAT ABOUT ALL THOSE BARRELS?

Well…sadly, some of the barrels contain cider that has gone bad. The contents of other barrels and bottles have been passed onto vinegar companies, hobbyists, and a few cider makers, but COVID-19 hasn’t helped with those who would take a serious interest in it, so by way of necessity, I’ve been emptying it barrel by barrel into two stainless steel tanks, then having it pumped by a local septic service. It’s painful to see, knowing all the work and time that went into making it, but I’ve had many people try the barreled cider only to find it’s just not very … good at this point. I even reached out to a few local organic farmers to see if it could be used as an herbicide but that hasn’t gained much traction. 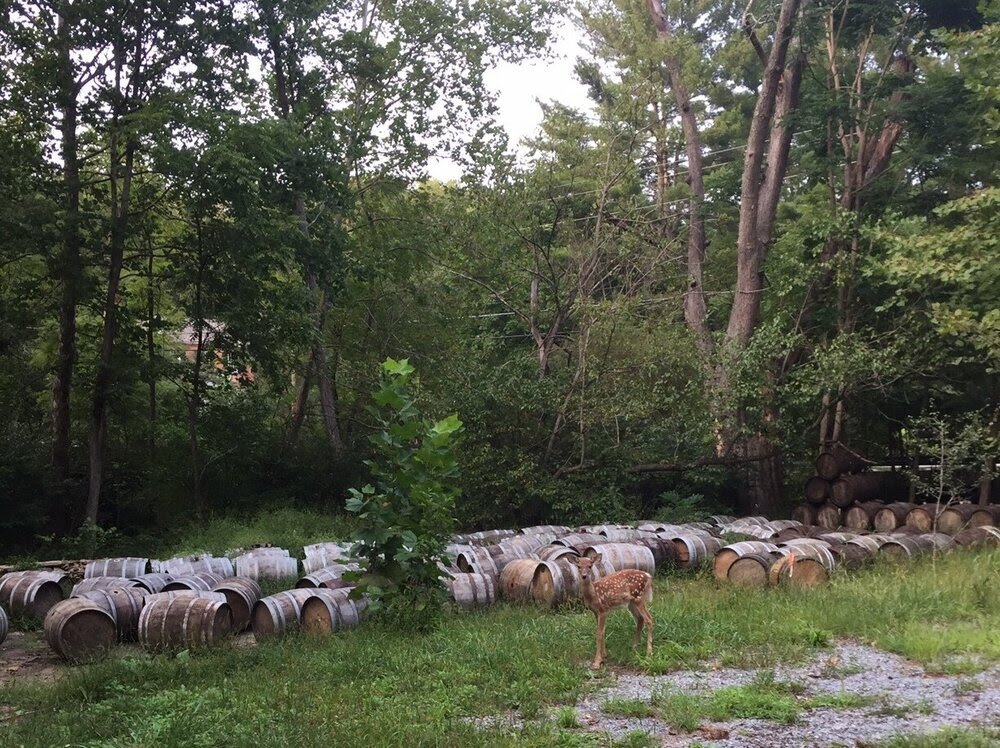 Donkey Kong anyone? Most of the cider was no longer good and was pumped into stainless steel containers; then the barrels were power washed. A few empty barrels are for sale, a number will remain on the property, but most will undergo their own transformation into interesting pieces of furniture, outdoor decor, and the like – which will help subsidize the expensive restoration and rehab projects ahead.

AND THE CASES OF CIDER?

There are lots and lots of cases of bottled cider. While, ironically, I’m not much of a fan of hard cider, friends and acquaintances who do like it have told me the cider is decent, if not good. My hope is to sell it off at a deep discount in the near future once I get the appropriate temporary permit.

Right now, the Mill and the associated Miller’s House are on the Federal Register of Historic Places, but neither are currently recognized as a landmark by the County. I’m hoping to change that over the next year since it seems clear they should be on both. 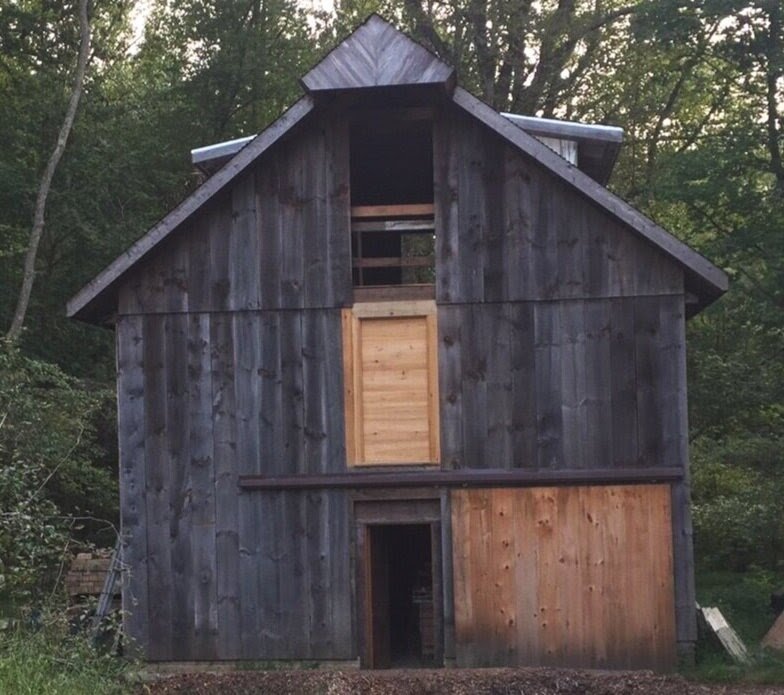 The barn is a very peaceful place. I hope to add some simple windows and finish closing it up to protect it from the weather. A local expert in barns and most everything in traditional wood-working, Robert Jones, has been both a mentor and a likeminded spirit lending a hand.

I love that so many people have stopped by and offered help. There’s loads to do, but it’s been tricky finding the right jobs that make sense and are actually interesting. Rinsing out bottles of cider just doesn’t seem like a job I’d like to foist on anyone. But please feel free to reach out if you have a specific interest. 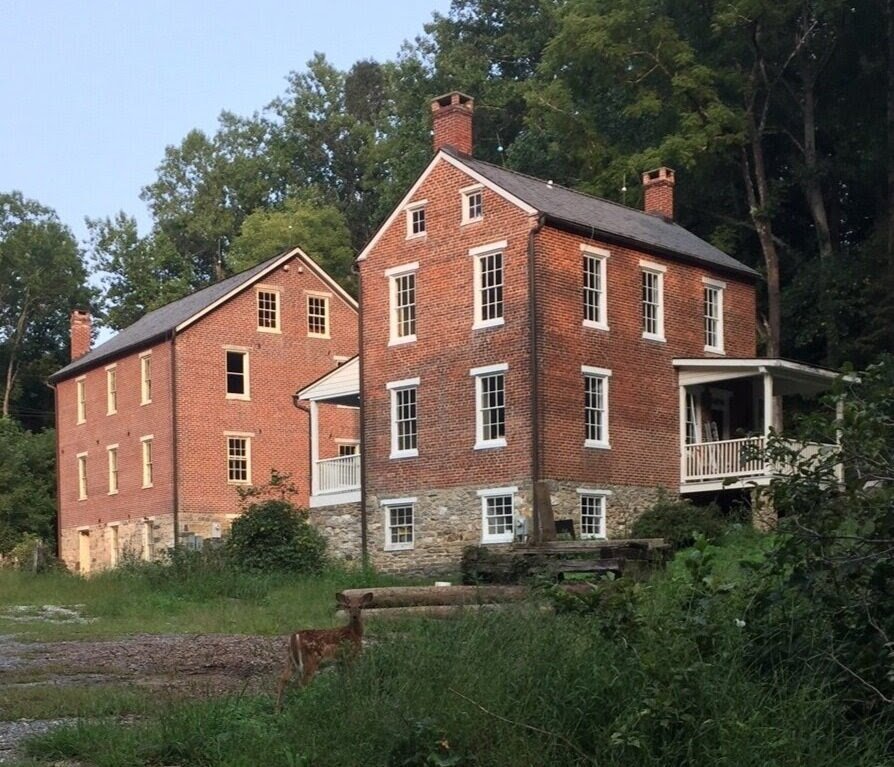 Thanks for making it to the end! Here’s a closing shot of the Miller’s House and Mill.