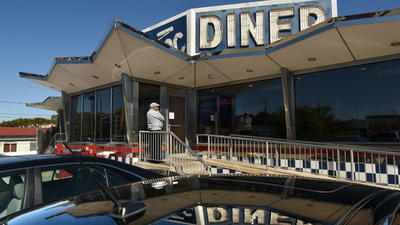 After 53 years, the Bel-Loc Diner in Towson is closing.The diner announced that its last day will be Sunday, March 26, in a March 11 message to patrons on its Facebook page.

“We wouldn’t have done it without you. We hope that you can join us for a meal or two prior to closing,” the post reads.On Tuesday, the diner’s owner, Bill Doxanas, said he is closing the diner because he wants to retire. Doxanas has worked at the family-run business for 45 years, he said.

The announcement comes nine months after a plan by the Seattle-based Starbucks to turn the site into one of the company’s coffee shops with a drive-through was approved by the county’s Design Review Panel, a group of seven architects, landscape architects, engineers and other design professionals, appointed by the county executive, whose task is to encourage design excellence in special portions of commercial revitalization districts.

There are no upcoming events.

Help Us Help our Community to Save More Historic Buildings

Powered by Convert Plus
Go to Top